If you missed the previous part in this short series, read it here: 3D Printing for Large Scale Trains – #3 Feldbahn Freight Car Prototypes.

In my last post, I showed the prototypes of the Feldbahn freight cars I designed (and 3D printed). I used an ugly silver colored filament because I didn’t have a black roll of filament at the time, but I have the black stuff now. 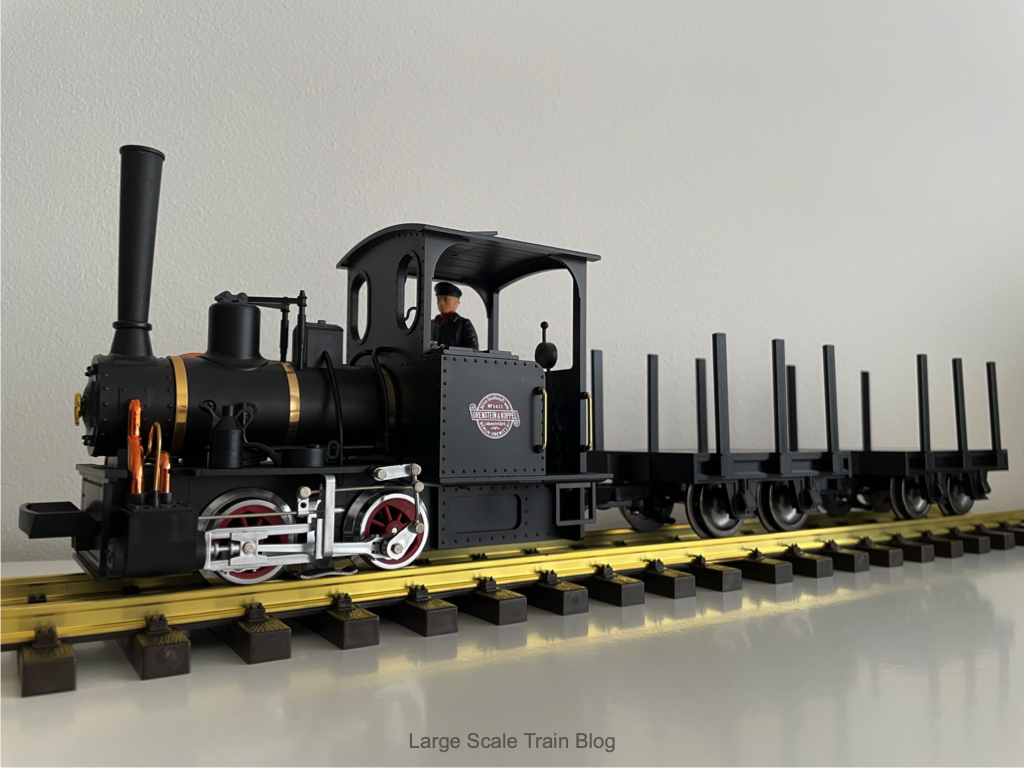 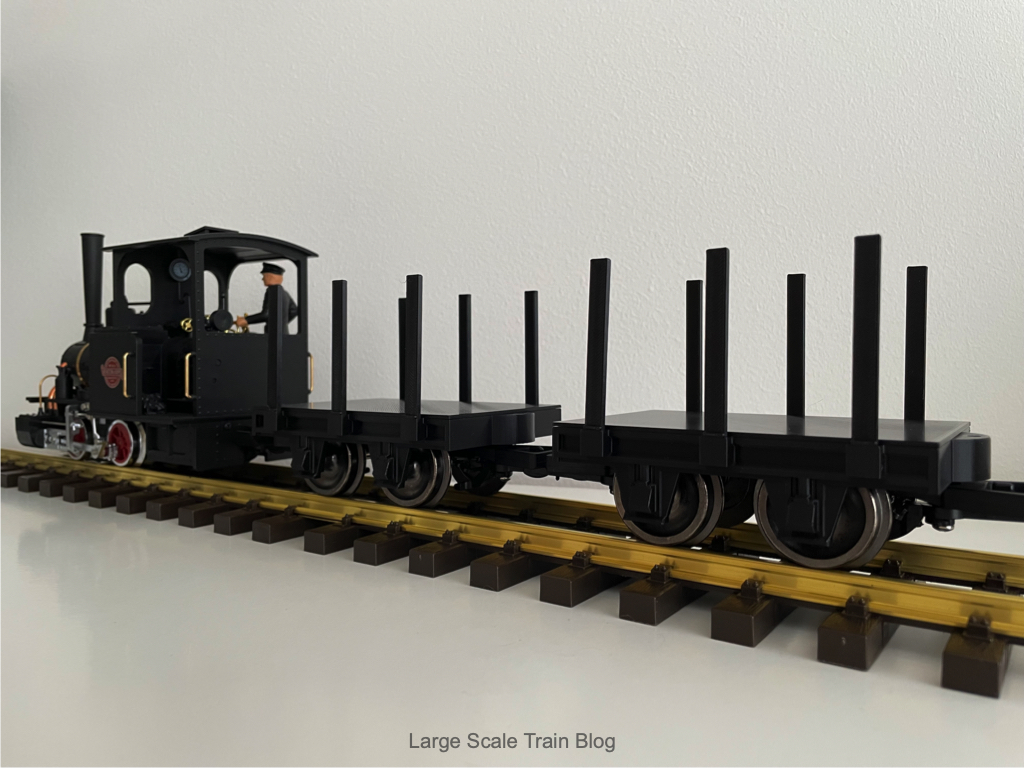 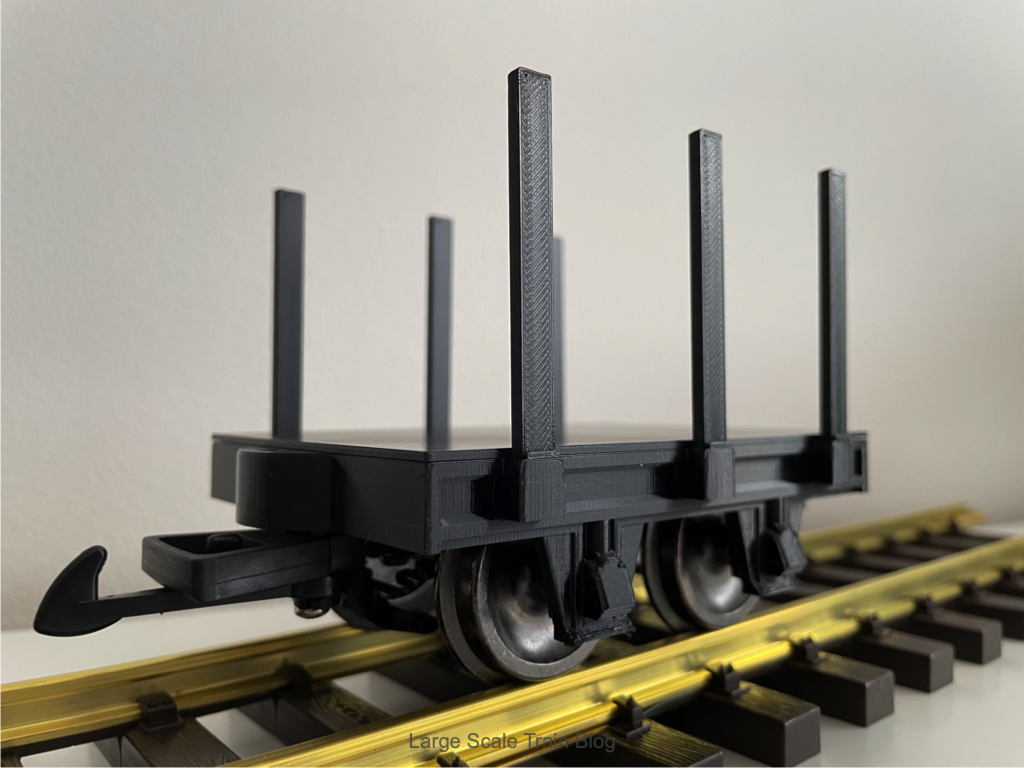 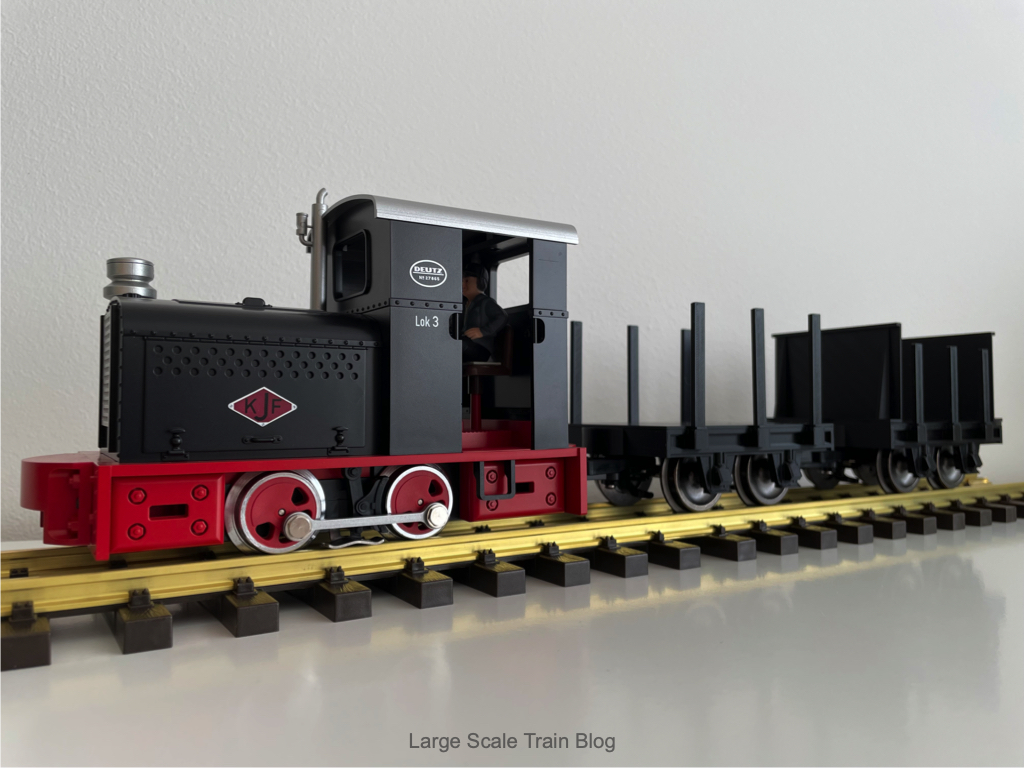 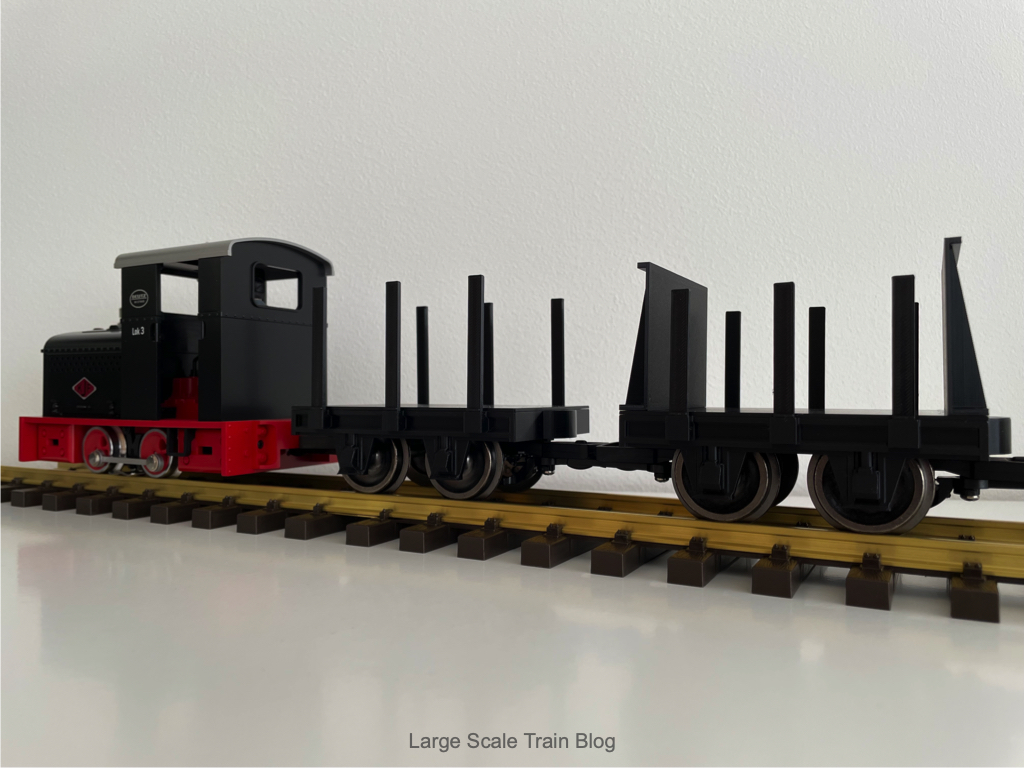 I printed these with PLA filament now, which is a type of filament that is very easy to print, and thus great for prototyping. It’s good for indoor use, but for outdoor use in very hot and sunny locations, it’s probably not enough (aka your trains will melt). A better material for outdoors is PETG, which I’ll try next. Also, I’ll try and design some more variants to improve my 3D drawing skills, probably a pair of disconnects first, and a gondola car for even more variety.

Something else: I’ve received an email asking for the source files. I am open to sharing them, but I need to do a bit of research on how to handle this from a “legal” licensing perspective. I want to share them for free on this site, but I don’t want them ending up as ready-to-run printed models on eBay or AliExpress because someone else decided to make money of my design without my explicit approval. There’s probably not much I can do about it (that’s the way the internet works), but at least I’d like to do a bit of research first.

If you missed the previous part in this short series, read it here: 3D Printing for Large Scale Trains – #2 The Prusa Experience.

In the previous post, I briefly introduced my first experiences with my new Prusa i3 MK3S+ printer. To properly get started with 3D modeling and printing, I started designing a small Feldbahn style freight car to match LGB’s G scale Feldbahn locomotives.

As you might know, LGB has two wheel sizes in their portfolio: the regular size wheelsets they use for all their regular rolling stock, and the very small wheelsets used in some Feldbahn rolling stock. I wanted my design to support both types of wheels, taking into account standard coupling heights when using standard hook-and-loop couplers.

Designing something from scratch requires a LOT of iterations to get the end result you envision. I have changed and tweaked the dimensions of the axle boxes (aka journal box) many times together with the axle bearings to allow good running characteristics. Also, I only tested with LGB wheels in the beginning, and then I tried to fit some Bachmann wheels (well, actually Liliput – the European name of the Bachmann brand), but they didn’t fit… More redesigning.

The end result is that I have two types of chassis: one for generic large size wheelsets (Bachmann, LGB, PIKO, …), and one for the smaller LGB wheelsets. The axle bearings are changeable, as they are subject to wear. The floor is removable, as I have some different designs in mind to keep a rake of freight cars interesting. A flat car, flat car with stakes, bulkhead flat car, hopper car, etc.

As mentioned, the cars are compatible with regular hook-and-loop couplers, I also added a small center buffer with a hole to use link-and-pin style couplers or the popular three-link-chain couplers.

I’ve printed some prototypes in a hideous sparkly silver color (from a roll of filament that came with the printer), the final design will be printed in black and at higher detail (0.10 mm layer height instead of 0.20 mm). More on this in a next post! 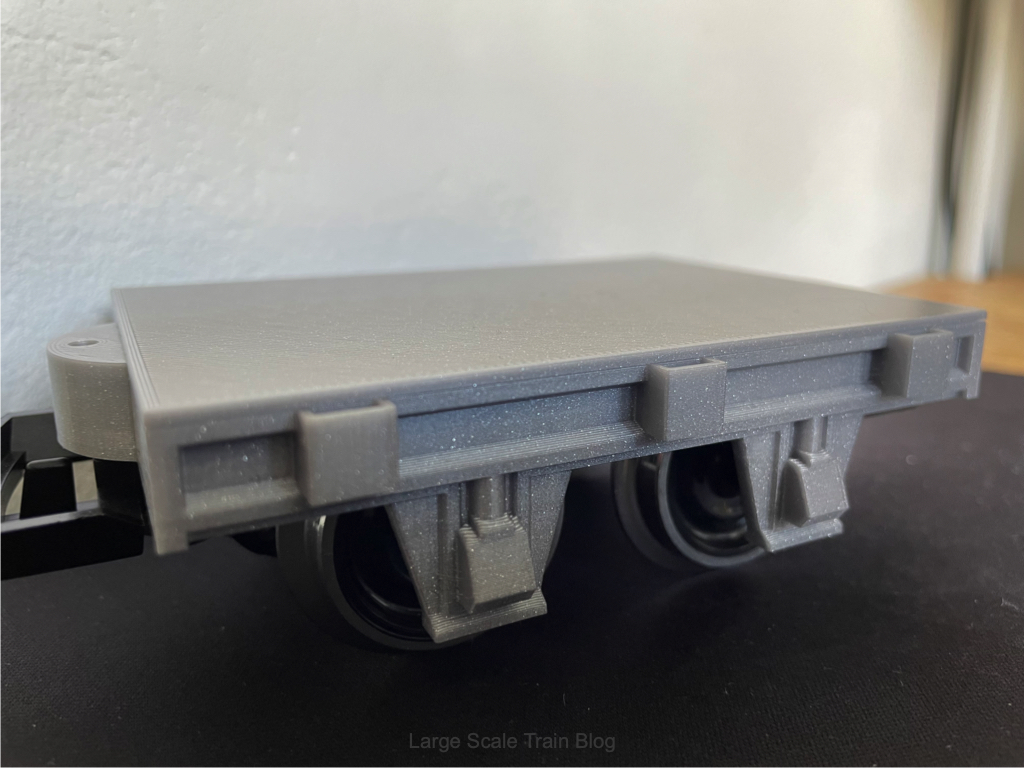 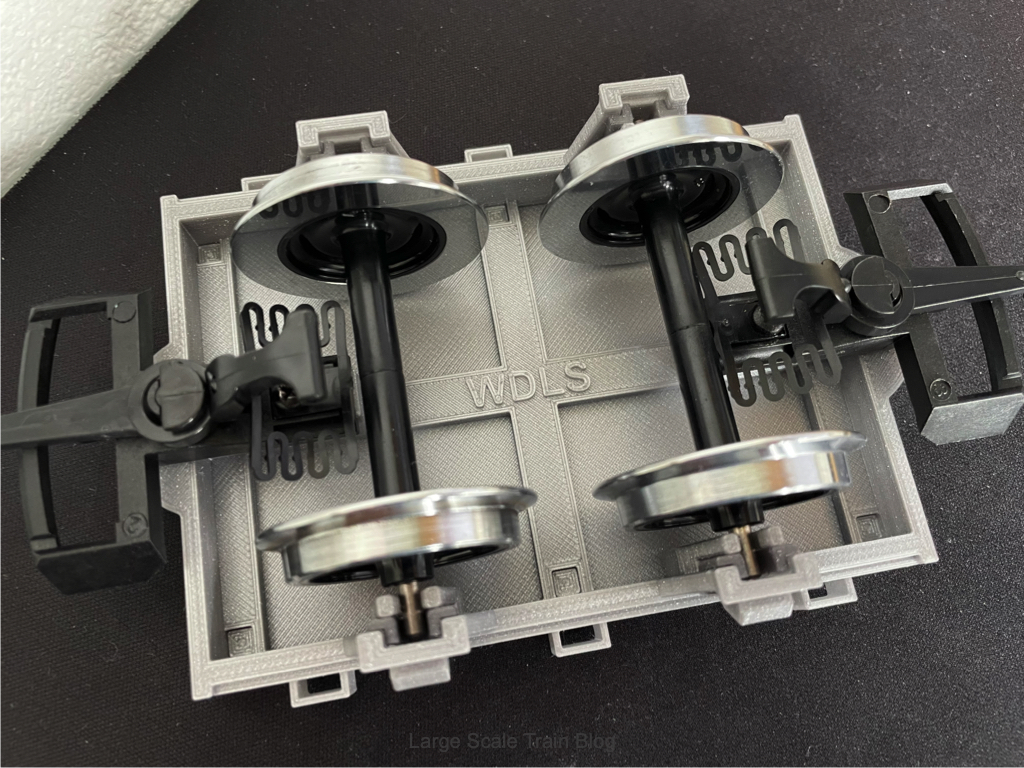 The chassis, floor and axle bearings are separate pieces. The axle bearings slide into place, and then the axles “click” into place as well. The floor is self-aligning and is intended to be glued to the chassis. 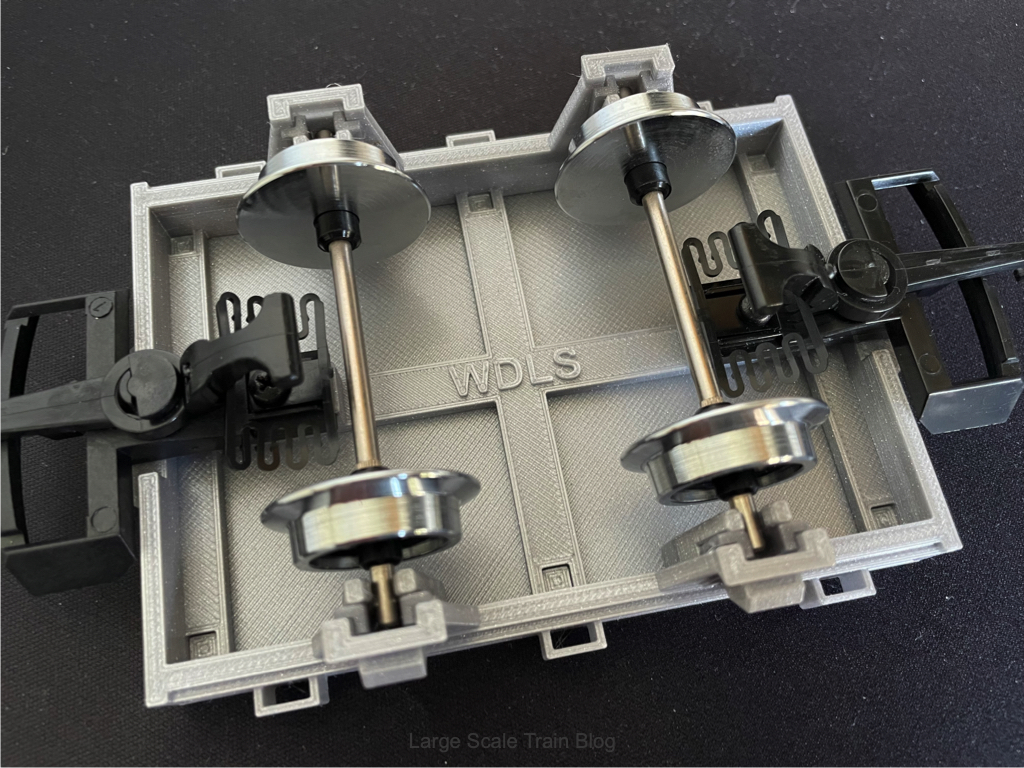 Small and large next to each other, linked via hook-and-look couplers. 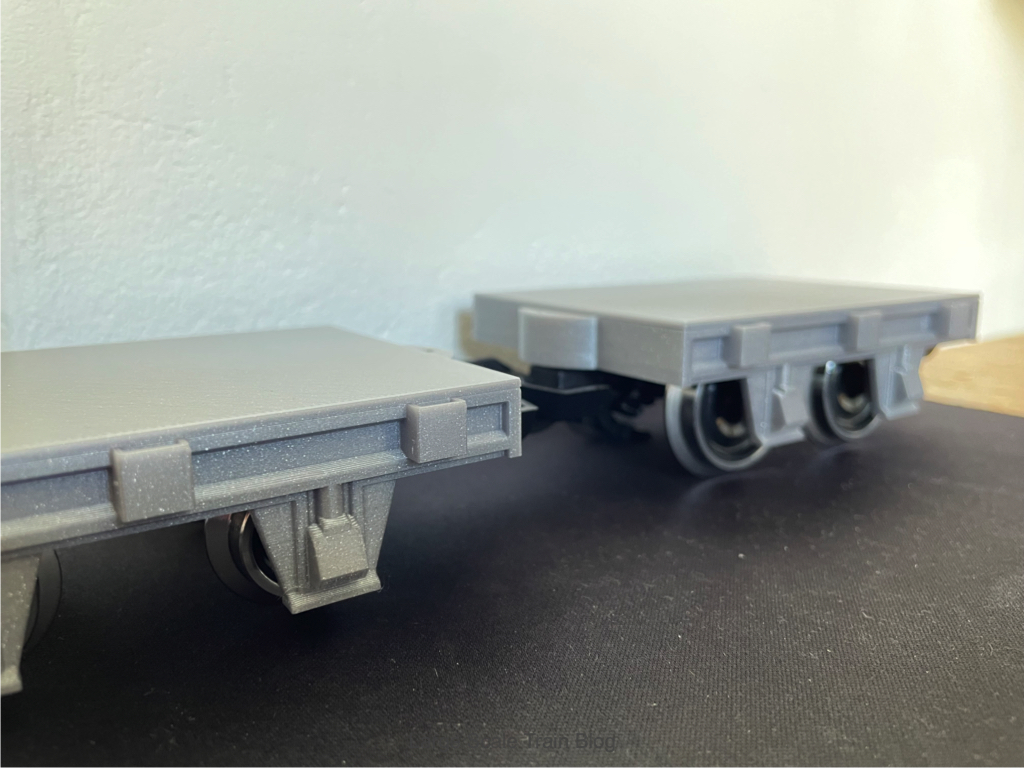 Just an insight in some iterations in the process… 🙂 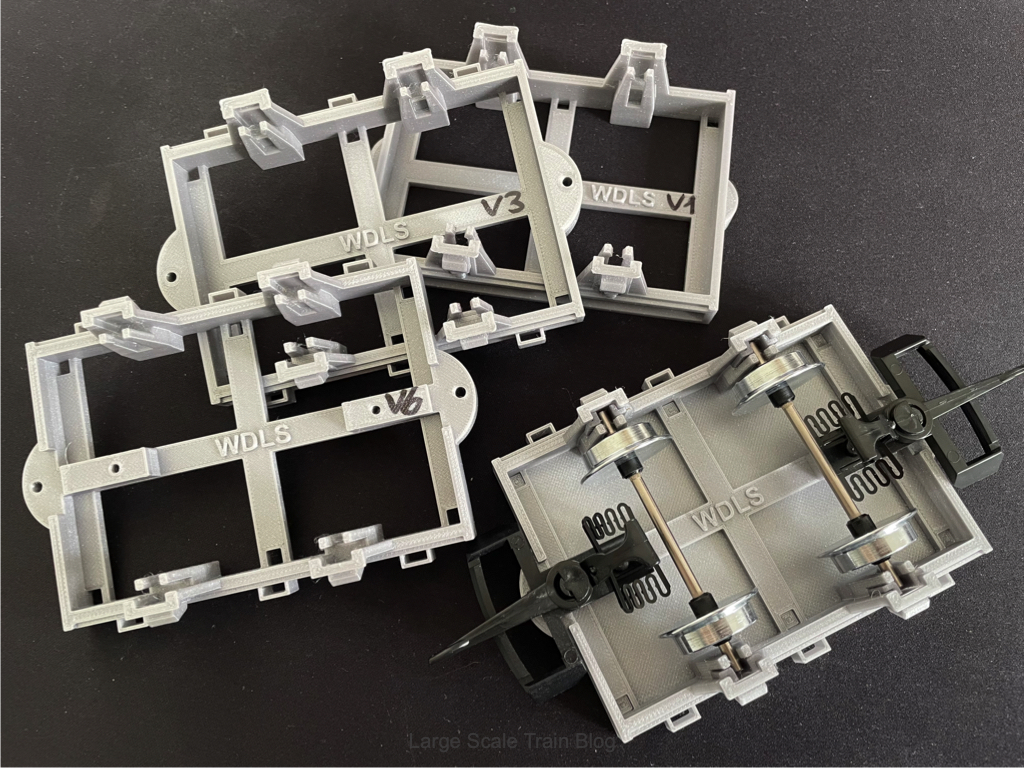 If you missed the first part in this short series, read it here: 3D Printing for Large Scale Trains – Introduction.

In the previous post, I mentioned purchasing a pre-assembled Prusa i3 MK3S+ printer from the highly regarded Czech company Prusa Research. The printer comes with everything you need to get started, and for real, you can be printing within an hour.

Right off the bat, prints have been great. I had to slightly adjust the “Live Z” value to finetune the quality of the first layer, but this was easily done. I started using leftover PLA filament from my previous printer (Velleman), and apparently this filament was very prone to stringing, even when using lower temperatures and increasing retraction. I just gave up on it, and ordered Prusa PLA, and the stringing is minimal now. So I’ll use the Velleman filament only for prototyping from now on, and take the Prusa filament for “production” prints.

Very little tuning, very consistent print quality, I am very glad the printer is delivering on all the promise so far. 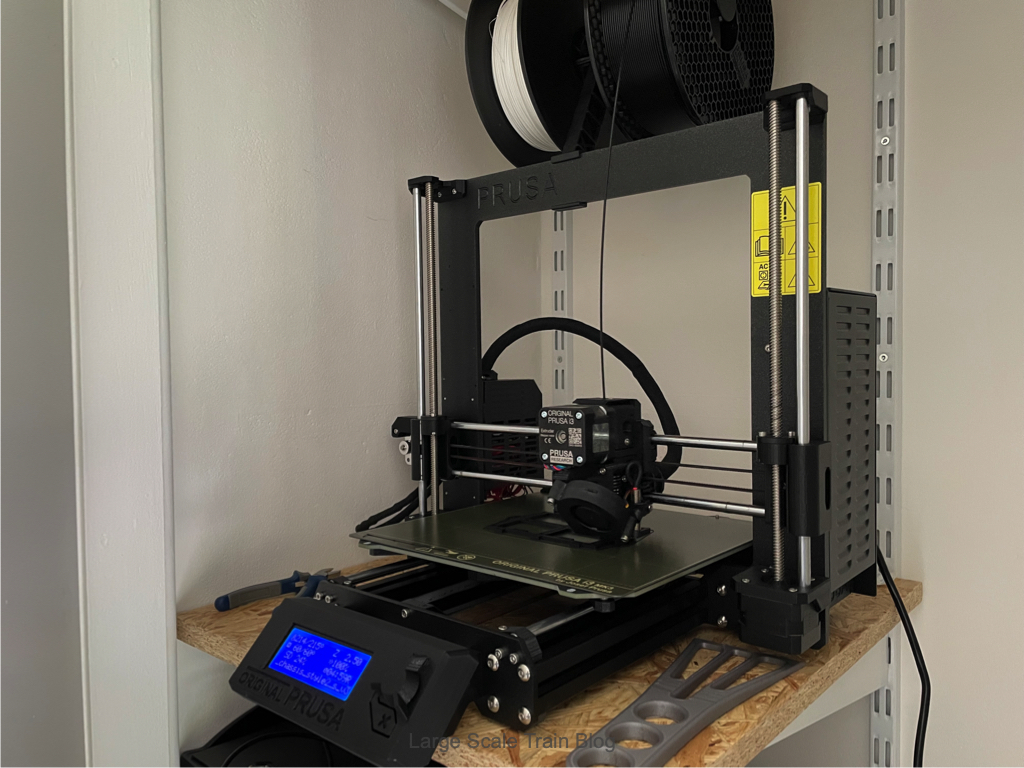 First project: dusting off the Feldbahn freight car project I designed six years ago in Sketchup, and building it again from scratch in Autodesk Fusion 360. More details in a next post in this series.

I think that everyone in the hobbyist scene – whether it’s trains, cars, boats, planes – has been hyped about the potential of 3D printers for their hobby at some point. “I can create anything, no need to buy any more stuff!“, yet reality has proven to be very different. The 3D printing scene has progressed a lot in the past years, and its potential is very clear today, yet the same applies to its limitations. With the 3D printing scene gaining this maturity, it’s much easier these days to judge what would be a good use case for 3D printing, and when it’s better to use any other type of manufacturing (laser cut, mould injection, …).

For readers new to 3D printing, a quick explanation of two majorly different types of 3D printing: 3D printers for home use, and 3D printing for industrial purposes. For home use, you’ll hear the terms “FDM” and “FFF” being used interchangeably. For more advanced home use and in the industrial scene, printers are typically of types “SLA” or “DLP”. Examples of professional 3D printing services are companies like Shapeways or Materialise.

If you want to learn more about the different types of printers, this is a really informative video:

So, if you want to get started at home, a FDM printer is the way to go. Of course, there are many brands available, in different price ranges, offering different build volumes (the maximum dimensions of the object you can print), and other quality-of-life features.

About six years ago, I was kind of fed up with the G scale scene, and I wanted to move towards more accurate 1:22,5 scale narrow gauge modeling. Besides buying generally available models, I also wanted to try out scratch building to fill the gaps in the manufacturers’ offerings, and in general to just learn a new skill (or two, or three, …).

I had no knowledge about 3D printing at all, and actually about scratch building in general, so after limited research, I picked a 3D printer kit that was supposedly a good one (at the time). So the printer kit I bought was a Velleman Vertex K8400, for about 400 Euros if I recall correctly. Assembling the printer was not too bad, but I remember being anxious about making sure everything was tightened properly, making sure I didn’t forget any screws or bolts, etc. And hooray, it was alive, and everything seemed to work properly. To learn about the printer, I mostly printed some objects of which the designs were publicly available. I didn’t even print trains, just other random stuff. The results seemed to be nice, so I then had to learn how design my own stuff.

At the time, I had a review sample of an LGB Feldbahn style diesel locomotive for my G Scale News website (now Large Scale Train News), so I wanted to print a freight car to go along with that. I based the design on a freight car from LGB to match the dimensions as closely as possible. I just wanted to learn how to draw first, and worry about making my own designs later. I used Sketchup, which was easy to learn, but harder to draw more complex shapes in. It did the job, so I ended up printing some freight cars indeed. That was really a “Aha!” moment to see the magic happening right under your nose. Going from a roll of plastic, to a ready-to-run item on your railway. Absolute magic.

Then, reality sets in. Overall, I was happy with the print quality, but the printer was kind of inconsistent. Sometimes the first layer was good, sometimes it wasn’t. Most of the time edges were nicely flat, sometimes with irregularities. I know this sounds a bit vague, there’s a 3D printing lingo describing all these things, but I’ll keep it as simple as possible here, ha!

Wanting to do more complex designs (e.g. a locomotive) with reasonable detail, I figured this printer (or FDM printing in general) wasn’t meant to be. Combined with other interests outside the hobby (career, buying a house, having a kid), I actually quit the hobby entirely.

However… a few months ago, I was itching to get back into the hobby. Among other things, the 3D printer was dusted off, and… I was still disappointed :-). With the progress in the 3D printing scene, I figured I would give it another shot. I didn’t want to bother with a printer kit again, so only pre-assembled printers were on my short list. Having a bit more money to spend these days, I really wanted to do it right this time, and I opted for the highly regarded “Prusa” brand. I ordered their “i3 MK3S+” printer, which arrived after about a month. Wow, what a world of difference. More on that in a next post.

All news posts and info pages have moved to Large Scale Train News!